Those were the days. No longer.  At 30 million b/d OPEC only produces about a third of the 90 million barrels a day of the oil the world produces and consumes daily. The United States, Russia, Canada and China combined now produce as much oil as OPEC. With the exception of Russia, these other countries are not as dependent upon oil to power their economies as the 12 members of OPEC. The United States and China, the world’s two largest oil importers and consumers, actually benefit greatly from lower oil prices.

At the OPEC meeting on November 27 the decision was made to make no attempt to constrain production. Oil prices tanked immediately. In fact, world oil markets had already anticipated this decision to a great degree. With WTI closing at US$66.15 on November 28, crude traded at the lowest price in over five years, July 29, 2009. Western Canada Select (WCS, Canada’s blend of bitumen, synthetic crude and condensate) closed at Cdn$55.31. Following is a snapshot of crude prices for the last trading day of November, a year ago, and the average price for each commodity so far this year.

All of these commodities are trading about $30 a barrel lower than their average price so far this year even when favorable Canada/U.S. currency exchange rates are taken into consideration. While WTI and Brent prices have improved by about US$2 a barrel in early trading today, they are still well below the levels that have generated the type of spending activity that OFS operators have become accustomed to in the past few years.

What does this mean for the Canadian oilfield services sector? There is no good news. Canada produces about 4.1 million barrels a day of conventional crude, bitumen, synthetic crude and natural gas liquids. If oil prices in 2015 were to stay at these levels, and natural gas stayed the same, the size of the pie as measured by the value of all the oil produced would fall about 29% or $45 billion compared to 2014 from 2014 record levels of about $155 billion. The figures that follow are the value of all hydrocarbons produced in Canada per year dating back to 1998. The red line is how 2015 could compare with previous years. 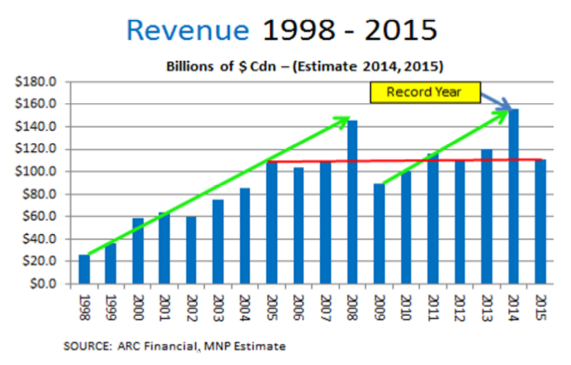 In reality, it isn’t likely to be this bad. What the $45 billion decline figures do not factor in is how much current oil production is “hedged” or locked in at higher prices on the futures market. At least for a while. Revenue in 2015 will be higher than estimated above for this reason. The other is a recovery in oil prices based on supply and demand fundamentals next year, which will be explained later in this article.

There have been lots of theories floated about why OPEC (particularly the Saudis and other low cost producers like Kuwait, Qatar and United Arab Emirates) decided not to reduce output and sustain higher prices. One was to punish a potentially nuclear and ambitious Iran. The other was to put pressure on expansionist Russia.

But what it really means is that market forces have ended OPEC’s ability to dial in world oil prices. Likely forever.

The biggest single change in world oil markets in the $100 a barrel world since 2008 has been the application of new technology and extraction methods in North America to previously uneconomic or marginal reservoirs containing oilsands and shale oil. Canada and the United States have increased their combined production by about 5 million b/d in the past six years. This is the biggest change in world oil production patterns in decades. If prices stay at high levels, this will continue to increase. Estimates from CAPP and CERI have indicated that Canada could double oilsands production in the next ten years, triple in the next 30. As has been written many times, the United States appears to be able to continue to increase production in oil shale deposits in places like the North Dakota, South and West Texas.

So what really happened with OPEC last week is global crude oil market realities have been analyzed, acknowledged and accepted. Should OPEC shut in production to sustain higher prices, the result would be a permanent loss in market share because it would keep new supplies of higher cost oil economic to develop. You can pay now or you can pay later. The Saudis in particular have finally concluded that they will indeed pay and have decided to trade short term pain for long-term market share and price stability.

Going in to the OPEC meeting, analysts figured that the market was oversupplied by up to 2 million b/d and only a production cut of 1 million b/d would have a meaningful impact on oil prices. The good news is a 1 million b/d swing in market fundamentals is achievable in 2015.

Low prices will spur demand. A demand increase of 500,000 b/d is less than a 6% increase in world consumption. With prices down by 1/3 (or more if it gets worse), this should be achievable as airline fares decline and it becomes cheaper to travel by automobile everywhere. On a global basis, a US$30 a barrel drop in oil prices will transfer a whopping US$2.7 billion a day or nearly US$1 trillion a year into the pockets of oil consumers. This will be a very positive economic stimulus to the world economy and increase demand for petroleum.

The other factor is a 500,000 b/d decline in production. While prices are still high enough that nobody is likely to shut in any existing production, the economics of the next tight oil play to be drilled are very different. Many shale oil wells experience production declines of 50% per year. Only steady drilling can sustain or increase production. Access to capital for tight oil developers will be squeezed through reduced credit facilities for existing production (with reserve values re-priced at current prices) and contracted equity markets.

Only the best and most efficient operators in possession of the best tight oil or natural gas liquids assets will be able to sustain their drilling and development programs. It is not a reach to conclude that reduced drilling caused by squeezed economics could easily cause a meaningful decline in North American tight oil and liquids production halfway through 2015. Of the 4 million b/d of increased tight oil production in the U.S., 500,000 b/d is about a 12.5% decline.

As supply and demand start to fall into line, prices will stabilize then improve. Many analysts are forecasting an oil price recovery in the second or third quarter of 2015. This explains why.

What is the outlook for the oilfield services sector? The 1998 – 2015 revenue figures tell the story.

The 11-year run from 1998 to 2008 was fantastic for OFS. The size of the pie increased over 500% during this period and the demand for equipment and services grew with it. After the major correction of 2008, a similar growth cycle occurred where the value of all the oil and gas produced in Canada increased by over 70% from $90 billion in 2009 to over $155 billion in 2014.

Oilsands development has been delivering steady growth for OFS for almost 15 uninterrupted years. That will end in 2015 and is, in fact, already underway.

Everything has changed in the past 90 days. Forecasts from PSAC and CAODC for over 10,000 wells in 2015 released in the past month were based on US$85 crude. Now prices are only 80% of those levels, possibly rendering these figures optimistic (again, hedged production will increase total cashflow available from exiting production). Oilsands projects that have been postponed, delayed or cancelled will surely stay that way until oil prices stabilize and concrete indications of lower-cost pipeline takeaway capacity materialize.

In these market conditions OFS owners and managers will be asked to share the pain with their E&P company clients through lower prices. While nobody will welcome having to do more for less, it is impossible for OFS to succeed without its clients succeeding. One strategy that can help is consolidation by which OFS operators spread their management and fixed costs over a larger operation and revenue stream, thus creating improved overall margins at lower prices. Another is for companies to exit the business which, unfortunately, always happens when this business contracts this much this quickly.

Increasingly, more crude market analysts and producers are beginning to see a significantly lower price deck as the reality for the next couple of years. This is because many of the tight oil and natural gas liquids plays will still be profitable at $70 or less, and thus development will continue, albeit at lower levels. This will be assisted by lower prices for goods and services and improvements in operating efficiency. And new technologies that reduce costs and enhance production are always winners, regardless of market conditions.

Most oilpatch entrepreneurs purport to be big fans of free markets. What goes up in this business always comes down.