June 03, 2015
Two-part blog featuring an article from the Daily Oil Bulletin published on June 2, 2015, and a small piece from The Economist published in their agenda on June 3, 2015.


(Reuters) — Europe's oil and gas companies took direct aim at the coal industry Monday, calling upon governments to set a global price on carbon emissions that could dramatically drive market share from coal to natural gas.

The joint declaration issued by six European oil and gas majors was cautiously embraced by the United Nations, which will host negotiations this December in Paris aimed at designing a plan to cut the fossil fuel emissions that scientists blame for rising temperatures.

The companies argued that when burned to make electricity, natural gas typically generates around half the carbon emissions of coal.

The willingness of oil and gas firms to accept a fee on carbon emissions was widely seen as an attempt to improve their image at coal's expense.

It comes as the oil and gas industry is caught in a growing divestment campaign that urges investors to withdraw from fossil fuel companies because of their carbon emissions. They also face pressure from policy-makers in several countries who want to shut off billions of dollars in production and consumption subsidies that benefit the sector.

“Oil firms are under a fair amount of pressure to not be seen as obstructionist on climate,” said Alden Meyer of the non-profitUnion of Concerned Scientists, who was in Bonn, Germany, where international negotiators are preparing the groundwork for a deal in Paris.

“They are hearing it from their shareholders, from institutional investors. This appears to be their strategy: to work on an international pricing mechanism.”

The UN welcomed the signal of co-operation from a sector that once resisted any attempt to add costs to doing business.Christiana Figueres, the UN's chief climate negotiator, noted in Bonn that oil companies have “enormous engineering capacity (and) enormous financial weight in shifting capital from one source of energy to another.”

The direct victim of such a shift would be the coal industry, already under tremendous financial stress from a U.S. domestic boom in oil and gas production and public policies, especially in Europe, that target its heavy carbon emissions.

The industry has fought back with a pre-Paris strategy of its own: seeking to build alliances with developing countries that regard energy shortages as a bigger problem than carbon emissions. The industry says coal remains the cheapest way to provide energy "justice" for poorer countries.

In its attempt to push back, the coal industry has reached out to governments that “anticipate a significant role for coal in their future energy mix,” Sporton said. The WCA has met with officials from India to Indonesia, Pakistan, the Philippines and Malaysia, with the aim of enlisting them to defend a place for coal-fired power generation in any Paris agreement.

Nor will the WCA be without support in Paris from industrialized economies. Australia — a major coal producer — continues to pursue coal exports and finance coal power stations overseas. And the Japanese government sees a promising future in selling its emissions-reducing technologies to coal producers around the world.

But coal's "energy poverty" messaging is firmly rejected by green groups. Environmentalists warn that simply shifting consumption from coal to natural gas would dangerously delay the wider implementation of renewable fuels that are essential to curbing global warming.

James Leaton, research director at the Carbon Trackerenvironmental group, called it "a bit desperate when the coal industry has to rely on the poor as the main source of their long-term growth."

Indeed the six European companies could count on that lack of popular sympathy for Big Coal in deciding to advocate for natural gas to displace coal.


"The European companies are trying to find a place for themselves in what they know will be - in Europe - a much more carbon-constrained world," said David Goldwyn, an energy consultant who headed international energy affairs at the State Department from 2009 to 2011. What we are seeing, he says, "is a fight for gas as the back-up fuel over coal."
Yet other observers took the move by oil and gas companies at face value, calling it a significant step.
"It's part of a growing chorus of support from the business community for carbon pricing and for a stronger agreement in Paris," said Elliot Diringer, executive vice president at the Washington-based Center for Climate and Energy Solutions, a nonprofit policy group.
"They are calling for government regulation. I think that goes beyond PR."

The coal industry's mood is smokestack-black. In China, which burns half the world's coal, consumption in the first four months of 2015 was down by 8% year-on-year; imports by a stonking 38%. The market capitalisation of America's four largest coal companies is $1.2 billion, down $22 billion in 2010. America will shut 12.8GW of coal power-generating capacity in 2015, triple the 2014 figure. More will close next year. Natural gas and, increasingly, solar energy are cheaper and cleaner. The coal industry squanders water and emits poisonous mercury, lung-choking acids and soot. Green-minded voters dislike the climate-cooking carbon. Fancy clean-coal technology is proving ever more distant and dismayingly costly. As the mood shifts, so does the money. Norway's huge ($900 billion) sovereign-wealth fund is getting out of coal. Other investors - most recently, Bank of America - are also categorising coal as too risky. Nobody wants to invest in a doomed industry. Oil shares, anyone? 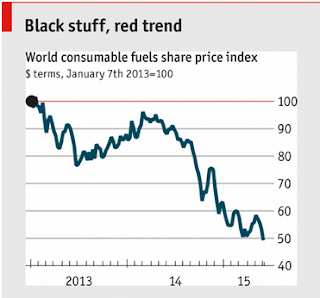 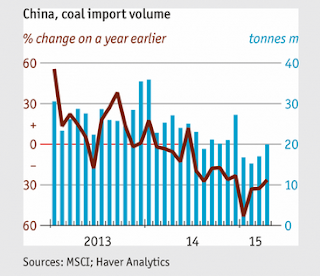