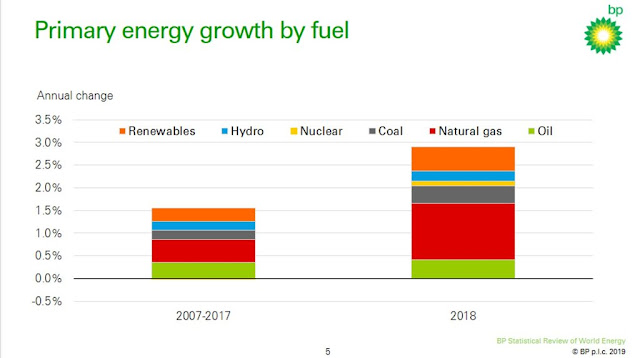 Global energy demand and carbon emissions from energy use grew at their fastest rate since 2010/11, moving even further away from the accelerated transition envisaged by the Paris climate goals, BP said in its annual Statistical Review of World Energy released this morning.


“The headline numbers are the rapid growth in energy demand and carbon emissions. Global primary energy grew by 2.9 per cent in 2018 — the fastest growth seen since 2010. This occurred despite a backdrop of modest GDP growth and strengthening energy prices,” Spencer Dale, BP’s group chief economist, said during a webcast from London.


“At the same time, carbon emissions from energy use grew by two per cent, again the fastest expansion for many years, with emissions increasing by around 0.6 gigatonnes. That’s roughly equivalent to the carbon emissions associated with increasing the number of passenger cars on the planet by a third.”


Demand growth was largely driven by China, the U.S. and India, which together accounted for around two-thirds of the growth. The growth in U.S. demand caught Dale and the BP team somewhat by surprise.


“Relative to recent historical averages, the most striking growth was in the U.S., where energy consumption increased by a whopping 3.5 per cent, the fastest growth seen for 30 years and in sharp contrast to the trend decline seen over the previous 10 years,” he said.


“The world needs carbon emissions to fall dramatically, but they continue to grow. And energy-related emissions are not just growing — they accelerated in 2018, increasing at their fastest rate for seven years,” he said.


“This rising trend in emissions is coupled with the biggest growth in energy consumption for nearly a decade — driven by China and India … something we’ve become used to. But also by demand growth in the U.S. as well.”


According to Dale, an abnormally high rate of both heating and cooling days was the major driver of the U.S. demand surge.


“In the U.S., unusually, there was an increase in both heating and cooling days; in past years, high numbers of heating days have tended to coincide with low numbers of cooling days or vice versa,” he said.


“As a result, the increase in the combined number of U.S. heating and cooling days last year was its highest since the 1950s, boosting U.S. energy demand.”


Dudley said that the increase in both demand and emissions means the “world is not on a sustainable path.”


“If anything, we are moving further away from it, rather than getting closer. There has to be a greater sense of urgency, because the longer carbon emissions continue to rise, the harder and more costly the necessary eventual adjustment to net-zero carbon emissions,” he said.


“The science is telling us that, and so is the latest data in the statistical review.”


Added Dale: “There is a growing mismatch between societal demands for action on climate change and the actual pace of progress, with energy demand and carbon emissions growing at their fastest rate for years. The world is on an unsustainable path.”


Other key findings of BP’s 2019 statistical review include: