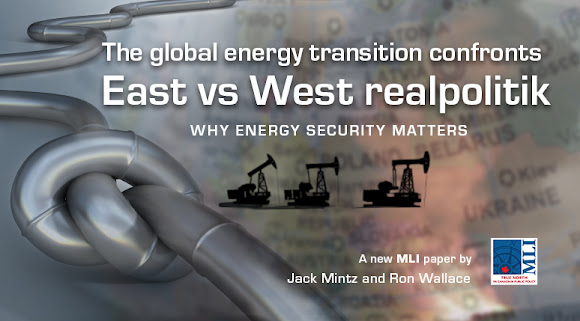 ENERGY SECURITY CANNOT BE FORGOTTEN IN THE GLOBAL ENERGY TRANSITION

OTTAWA, ON (April 12, 2022): While achieving greater energy efficiencies and reducing green house emissions sound reasonable, we need to examine how these goals will be accomplished and the consequences of doing so. Many government policies focus solely on environmental concerns – but at what cost?
In MLI’s latest paper titled “The global energy transition confronts East vs. West realpolitik: Why energy security matters,” Jack Mintz and Ron Wallace evaluate the West’s efforts to curtail fossil fuel use through decarbonization. The paper brings to light how current energy transition policies in North America and Europe are problematic as they ultimately undermine economic, energy and national security.

>From power interruptions and supply shortages to geopolitical instability, the consequences of a rapid transition are becoming more apparent by the day. The authors highlight the essential role that energy plays in promoting economic resilience and regional security – important considerations that slip out of view when environmental issues are prioritized.

“Global decarbonization has developed considerable momentum and is supported by many political and financial leaders,” write Wallace and Mintz. “These actions to limit or abolish carbon emissions assume that energy transitions are straightforward, even inevitable, and that alternative energy solutions can provide practical, adequate, sustained, and secure energy supplies.

“However, limiting production of fossil fuels in the West at rates faster than can be reasonably and economically replaced with alternative power would lead to market instabilities, power interruptions, and price increases.”

Russia’s invasion of Ukraine has brought these challenges to the forefront. As the authors note, in the mission to reduce fossil fuel production and use, Europe has only made itself reliant on Russian energy. Meanwhile, Canada continues to pursue policies to curb hydrocarbons. With a limited additional supply and inadequate infrastructure, there is no capacity to backfill against Russian oil and gas, meaning that authoritarian governments will continue to hold sway over energy-dependent democracies.
The authors find this troubling, writing that “policies that call for overly rapid transitions to net zero may have consequences that are anything but orderly – or peaceful.”

As Mintz and Wallace conclude, “energy transition policies in North America may increasingly be viewed as working to undermine both energy and national security in the continent, as have clearly occurred throughout Europe.”

To read the full paper, click the button below.

Ron Wallace is a former CEO of a Canadian defence manufacturer and subsequently served on federal, provincial and territorial energy and environmental regulators, including the National Energy Board. He is a Fellow of the Canadian Global Affairs Institute and a Board member of the Canada West Foundation.

Jack Mintz, CM, is the President’s Fellow at the University of Calgary’s School of Public Policy and Distinguished Fellow, Macdonald-Laurier Institute.