CAGC represents the business interests of the seismic industry within Canada – cagc.ca

At the annual Regulator/Industry September meeting, the Alberta Energy Regulator (AER) and Alberta Environment and Parks (AEP) gave a joint presentation. The AER/AEP presentation included a very good brief summary of all the changes adopted within The Exploration Directive.

That presentation can be found on the cagc.ca website or with this link: https://cagc.ca/index.php?DL=dViIxR

Slides 4 to 16 of their presentation highlighted the changes to the various Sections of The Exploration Directive. The slides are a good reference guide to determine which changes could impact you.

As mentioned earlier, many of these changes were administrative with Section 15 being the major technical and operational transformation. Section 15 deals with the Distance Requirements for energy source proximity to specified structures. This update is significant as it may improve shallow subsurface imaging.

The following is a 50,000-foot view of the main things you should know about Section 15 and, at times, will drop to a 50-foot level to ensure you maintain regulatory compliance. The first four items listed below could easily become non-compliance issues if you simply repeat a 4D, as recorded previously.

1.    Previously, low-pressure pipelines had a minimum offset distance of 3 m for explosive sources that were 20 kg or less. Now there is a Scaled Distance requirement for low- pressure pipelines which requires greater offsets than used before. That means, if you are repeating a 4D, and reoccupying 3 m offset locations, your explosive charge will be in non- compliance. With surface energy sources the previous distance requirement was 3 m and now it is mostly 5 m. The reason the distances were increased was NOT because problems were encountered. The previous version of the Directive (ED2006-015) allowed 20 kg at an offset of 3 m from a pipeline. While it did not occur very often, large charges that close would not be a recommended practice. Low-pressure pipelines are now grouped with other specified structures (structure category D) that had greater distance requirements. 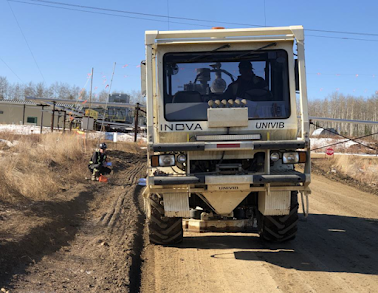 3.    If you add new dynamite locations to an existing geophysical program, you will very likely require a program tag to mark the location. These were previously called permit tags.

4.    The “Setback distance with consent of the owner” within the Tables means written consent and must be produced to the regulator on request. You may also need a strategy to acquire consent from the owners of structures. The CAGC had an example permit form that was used previously for written consent. You will need to develop a newer document for consent.

5.    The usual protocol, if you load a seismic charge into a seismic shot hole is to check the integrity of the detonator. If the detonator fails (very rare) the driller then places a second charge on top of the first charge. The intent is to sympathetically detonate the first charge. While this is the best practice to manage a potential misfired charge, you could be in non- compliance by virtue of charge size and distance to a structure. In a situation like this you may wish to measure the Peak Particle Velocity (PPV) close to the structure.

6.    Now you can get closer to company-owned structures, such as water wells, piezometers, observation wells, and buildings with consent. These structures are listed in column C and include structures owned by other companies.  Ensure your internal company departments, responsible for said structures, are aware you may be using energy sources closer than previously.

7.    While you could approach a structure with continually smaller charges, simplicity is much easier to manage. Let’s say 11 m is the nearest offset you would like from a company- owned structure. If you were mainly using 2 kg, then consider using 2 kg charge to as near as 64 m (with consent) and then everything closer becomes either 0.250 or 0.125 kg (just pick one). Ensure you have robust administrative and field controls to manage this. Introducing greater complexity using numerous charge/distance options could allow things to go awry very quickly.

8.    Your geographic location and near-surface ground conditions could be very different from all of the areas previously tested in the province. There is an expectation, within Section 15, you maintain vibration levels below certain thresholds. If you are working in an area with unusual material (a very compact near surface material like a drill pad), you could have vibration levels above expected values.

9.    You can get even closer to these specified structures (excluding dams) with an approved request from the regulator. The main intent of including smaller charges to the Table was to provide a safe Table of Distances for specified structures that could be used without having to adopt PPV monitoring on all programs. You will likely have to include PPV monitoring in any proposal to get closer than the current specified Distance Requirements.

10.    While it may be safe to get significantly closer with sources to some of these structures it was decided that: a) the Distance Requirements should follow the previously accepted Scaled Distance formulas, b) getting closer than 5 and 8 m from structures with mobile equipment becomes another risk (vehicle hits the structure), and finally c) the predicted vibration trend as you decrease the offset distance below 6 m may have a greater PPV response than predicted. 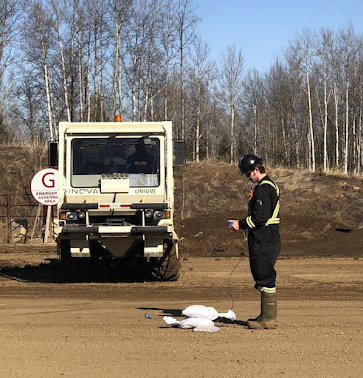 Here are some other important aspects to consider:

1.       An operator may be in regulatory compliance with a closer offset but will remain liable if there is damage to a structure. The onus may be on the operator to defend themselves and prove the damage was not caused by their energy source, as this will likely become a strict liability case. PPV monitoring and a pre-inspection is the best defence for an issues like these.

2.       Some structures are more susceptible to shear forces than vertical forces. Think about standing on a small wooden platform. The platform is hit from below, upwards. You would probably remain fairly stable. If that platform were hit from the side (think pulling a rug out from underneath you) you may perhaps topple. The natural frequency of most residential structures ranges from 4 to 12 Hz. When seismic frequencies are in this range the structure may shake more vigorously. Above 20 Hz, very little seismic energy transfers to the structure. An old wooden shed near collapse could perhaps be toppled easily by excessive vibrations.

3.       If you introduce large shear wave vibrators or spend a great deal of time sweeping between 2 and 18 Hz you could generate constructive wave interference. In most cases, vibrators do not transmit much low-frequency energy into the ground as the hydraulics simply cannot deliver [a 62,000 lb vibe generates 6700 lbs at 2 Hz, and 31,000 lbs at 5 Hz]. As technology evolves and more low-frequency force may be achievable, consider PPV monitoring and adjust the setback distances accordingly.

4.       As dynamite use evolves, one may have to consider: fly rock, air blast, and shear wave energy. Our dynamite sources are generally confined (stemmed hole), have been in the ground a while (sluffing of material and frozen in), and the blast noise is attenuated by the depth. If one was to use, very shallow charges or larger charges, detonated immediately after drilling, and the holes were plugged with rocky material you could generate fly rock. Shallow holes, Poulter blasting, or very large charge sizes can be louder and unpleasant. Very large air blasts from quarry blasting can damage windows (rarely a geophysical issue) so be aware. Additionally, if you were to use detonating cord in shallow trenches, as your energy source, you could perhaps generate more shear waves than an a similar weight of explosive charge at depth.

Previously when conducting geophysical operations there were several junctures where individuals could potentially discover a non-compliance issue and prevent detonation or triggering of the source energy. An example could be a HP pipeline missed by the survey crew. This could perhaps be noticed by other individuals on the program observing pipeline markers, trench, uplift, well heads, … where the drill location was marked. With all source points the following people could potentially catch an error: program designer, QC reviewer, chainer, surveyor, driller, another senior person on program, the seismic blaster or helper, and finally the recording observer. You may still have a problem if you drilled and loaded the charge, but the checks and balances could prevent initiation of the charge. Again, in cases like this it would be recommended to share the information and PPV monitor the event.

Clearly, if you plan on introducing different charge sizes within your program, ensure robust protocols are adopted to ensure compliance. Simplicity is the key to success.

Further information can be obtained by contacting the Canadian Association of Geophysical Contractors or the Alberta Energy Regulator at info@aer.ca.