The Challenge of Advocating for the Oil and Gas Industry - Is any one Strategy Perfect?

Article originally published by the Alberta Oil Magazine on November 2, 2015 and can be found here: http://www.albertaoilmagazine.com/2015/11/cody-battershill-oil-sands-advocacy/

It all started back in 2010, when a Calgary real estate agent named Cody Battershill saw two women wearing fake oil barrels outside a store on Vancouver's Robson Street. Lush, a retail chain that sells natural cosmetics, was in the midst of an aggressive campaign against Alberta’s oil sands and the greenhouse gas emissions they produce. “I’ll admit I knew zero about the oil sands and close to zero about the energy sector at the time,” Battershill says. “I looked into it. You scratch beneath the surface and find the whole campaign by Lush was instigated and created by one of these special interest groups.” That same year a controversy had erupted over the deaths of hundreds of migrating ducks that had landed on tailings ponds in the Fort McMurray area, and after getting sufficiently annoyed by the response, the 31-year old opened a Twitter account. He began tweeting at anyone and everyone, encouraging people to have a more nuanced discussion about the oil sands. And he hasn’t stopped tweeting – or talking – about the energy sector since.

Five years later Battershill has nearly 12,000 Twitter followers and has emerged as the de facto citizen spokesman for Alberta’s energy industry, an outspoken champion for oil sands workers and a thorn in the side of environmental advocacy groups. Battershill writes a regular blog for the Huffington Post and other publications, and is regularly called upon by the media to offer counterpoint to critics of the industry, hammering home his message as though being a spokesman were his job. Take the decision by Tim Hortons to pull Enbridge advertising from its stores. Battershill wasn’t impressed, and his relentless support of his cause took, as it often does, a distinctly patriotic tone. “Every single human in this country,” he says, “and all over the world either uses oil or wants to use oil.”

In order to advance his cause and promote his message, Battershill founded Canada Action, a non-profit group that runs campaigns touting the benefits of Canada’s energy and resource sectors. The group doesn’t have charitable status and relies instead on the support of volunteers, fundraisers, personal donations and speaking fees to stay afloat. It also runs an “I Love Oil Sands” campaign and sells T-shirts, hoodies, cellphone cases and hats emblazoned with the logo. On Facebook, the group has almost 22,000 fans. One of its two Twitter accounts, Oil Sands Action, has 13,000 followers. And behind each account is a poised but persistent Battershill, releasing a flood of commentary, infographics and statistics that support his message. One of Battershill’s goals for Canada Action is to reframe the debate around other energy and natural resource issues like wind and nuclear power, agriculture, fresh water and mining. “It’s about having an informed conversation,” he says. “It’s absolutely correct to say there are environmental impacts in the way that our cities are built, in constructing a wind farm and in constructing the oil sands … So, how do we mitigate those impacts? How do we innovate? And how do we constantly improve to find the right balance of environmental protection and economic prosperity, remembering the global context as a baseline?” 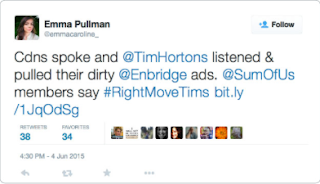 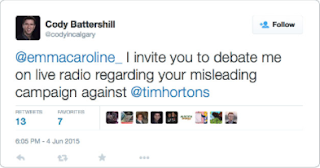 Like most online debates, the one about oil often gets nasty. Battershill says he encounters an endless stream of critics, many of whom take aim at him personally. Someone once posted the details of his parents’ divorce online, highlighting a particularly difficult passage about his childhood. Another said he could run a pipeline through the gap between his two front teeth. He’s been told to hang himself. In the face of such vitriol, Battershill says he tries to reach out to his critics directly. He says he’s routinely blocked on Twitter by the special interest groups he criticizes. “I try to meet as many people as I can in person because once you’re in person, you have a conversation that’s real, that’s respectful, that’s mature,” he says. “Even when I call someone out, it’s still in the realm of respectful.”

One of the most common criticisms leveled at Battershill, who skipped university to go straight into the real estate business, is the fact that, well, he’s a shill. In other words, the effort he expends defending the oil sands and the energy sector is a kind of sweat-equity loss leader that he uses to attract clients as a real estate agent. After all, when you’re in the business of selling real estate in Calgary it can’t hurt to be seen as conspicuously supportive of its biggest industry, and that’s doubly true when it comes to working with energy executives and their million-dollar homes. And while it’s not clear whether there’s a direct relationship between his advocacy work and his actual job, Battershill was named one of the top Remax agents in Canada in 2014. But Battershill says he’s motivated partly by his love of Calgary and Canada and partly by the failure of energy companies to successfully advocate for themselves. He insists it’s not about selling more houses. “If there was any benefit, it would be an unintended consequence,” he says.

The bigger question is whether Battershill is actually doing anything to shift those negative perceptions of the oil sands or advance the discussion in any meaningful way. Ken Chapman, a lawyer and former executive director of the Oil Sands Developers Group, doesn’t think so. Battershill’s eager commentary resonates with those who already agree with him, says Chapman, who’s met the realtor a handful of times. “Cody is functional about getting facts out, but he’s doing it on a rebuttal basis,” Chapman says. “He has created a space for people who believe what he believes to show up and be validated. I admire his enthusiasm. [But] I think he’s a little naive.”

Jeff Gaulin, CAPP’s vice president of communications, says that Battershill fills an important role in the evolving conversation around energy. “What’s refreshing about what Cody does is that it’s genuine grassroots activity. He’s tapping into a sentiment of pride and support for the industry, and I think that fills a niche.” But, like Chapman, he thinks that he can come on a bit strong at times. “He’s clearly a fervent supporter. And there’s a place for that, just as there are places for people who criticize the industry in a desire to make it better. I don’t think there’s any one magic solution to how to communicate with the Canadian public.” And that fervency, Gaulin says, can get in the way of having a more productive conversation. “Things that are shrill – at either end of the spectrum – are great, but you’re only talking to yourself. And really, what does it do, other than increase the temperature? What we really need are balanced voices that can enroll more people in a conversation.”

Chapman agrees, and he says that the broader discussion about the oil sands has devolved into a fight between two extreme positions with no discernible middle. But while Chapman doesn’t think Battershill is capable of being that moderate leader, he still praises him for his willingness to speak up in the first place. “Citizens have to be involved. He’s a young guy who got involved,” he says. “I have a lot of time for him.” So does Tom Donoghue, the president of Donoghue & Associates, a Calgary public relations and communications firm that has worked with energy sector clients in the past and has done business with CAPP more recently. He says that Battershill serves a useful purpose in the evolving conversation around energy, and it’s one the industry can’t – or won’t – fill itself. “They don’t have to agree with everything he says, and they don’t have to agree with how he says it. But he’s saying things that the industry can’t, in some cases. And they should let him go and do what he wants.”


Battershill, for his part, has no intention of stopping. In September, Canada Action was selling T-shirts at the Oil Sands Trade Show in Fort McMurray, and he says the online store is “going crazy.” Canada Action also hosted a rally in conjunction with the federal leaders’ debate that was held in Calgary on September 17 in order to offer up a counterpoint, Battershill says, to the one held on the same day by 350.org, a U.S. environmental group. And while some in the industry may not want his particular brand of help, he thinks they need it all the same. “They are improving … but I would honestly say there is a lot of work left to do,” he says. “If we do not start to think ahead, we are going to lose the PR war. It’s sad, because the facts, in my opinion, are on our side.”