Earlier this week Kinder Morgan announced its intention to suspend all non-essential spending on the federally and provincially approved Trans Mountain Pipeline project citing “unquantifiable risk” as a result of the continuing uncertainty created by the B.C. government. In response we are taking the unusual step to come together and call upon you to convene a meeting without delay with the Premiers of British Columbia and Alberta to resolve the impasse on the Trans Mountain Pipeline project and to clear the way for this project to proceed in the national interest.

Regrettably, this may not be enough. The continued obstructionist position of the current Government of British Columbia calls into question whether an agreement can be reached where the rule of law will prevail and commercial enterprise can, with confidence, build and operate a business in our country.

Should you and the Premier of British Columbia be unable to cooperatively resolve the current impasse within days, we then call upon you to utilize all appropriate federal powers at your disposal, including expand, if required, the Ocean Protection Plan, to ensure the Trans  Mountain pipeline project proceeds without further delay.

At stake is more than a pipeline project. The global reputation of our country as a safe and secure place to invest and do business is at serious risk.

It’s deeply concerning that a project that has gone through rigorous review, including four years of consultation and numerous federal and provincial conditions is now in this situation after being given a green-light to proceed. This threatens to provoke a crisis of confidence in  Canada’s regulatory processes with far reaching implications which go well beyond this project. It threatens to send a message to investors that Canada cannot be trusted. It puts billions of dollars of government revenue at risk—billions that pay for things that Canadians need, from teachers to MRI machines to affordable housing and further investments in protecting the environment.

Many small and medium-sized business owners, construction workers, people who support their families in manufacturing, and Indigenous Nations are now unfairly caught in the crossfire as a result of the uncertainty surrounding the project’s future and, collaterally, our country’s growing uncertain investment climate.

We appreciate your government’s support of this federally and provincially approved project. In the interest of all Canadians, your government must now make this issue its top priority. Creating certainty is of the utmost importance not just for the Trans Mountain pipeline project, but also to uphold the rule of law and Canada’s reputation as a place in which to invest, build and operate businesses.  As you are well aware, investor confidence is essential to creating  jobs, supporting healthy communities, and funding health, education and social programs. 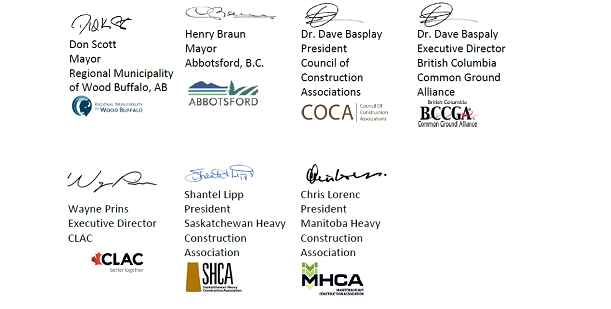