Showing posts from August, 2018
Show All

30 AUGUST 2018 Key messages: Federal Court of Appeal ruling on the Trans Mountain Expansion Project OVERVIEW Today the Federal Court of Appeal released its decision on a case involving a series of lawsuits aimed at stopping the Trans Mountain Expansion Project (TMEP). The nearly two-dozen groups involved in the suit, which included First Nations, environmental groups, and the cities of Vancouver and Burnaby, asked for the court to overturn the Order in Council approving the project. Alberta and British Columbia were granted intervenor status on the project, with B.C. supporting the challenge and Alberta not in support. The Federal Court of Appeal decision can be found here. KEY MESSAGES These are preliminary, the decision itself is 265 pages and we have not fully studied all implications. • While it is up to Trans Mountain’s owner to determine what the decision means for the future of TMEP, CEPA is concerned that this decision by the court, combined with ongo
Post a Comment
Read more 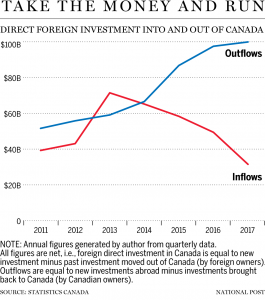 The writing is on the wall and the numbers are distressing to say the least. Foreign investment is fleeing from Canada and we are becoming an international investment pariah. Sadly, this trend should not surprise anybody as our national regulatory environment for large projects in the energy industry went from onerous to outright obscene. The Trudeau government is obsessed with adding unreasonable requirements for new business ventures and they have pushed things to the tipping point. Private enterprise can no longer do large projects. We are losing billions though lost development and price markdowns due to lack of infrastructure. I spent four years working in the Arctic back in the early 2000s. The area was booming as people trained and looked forward to development of a local industry. There is a massive oil and gas deposit in the Mackenzie Delta that would bring billions if not trillions into Canadian coffers over generations if we could only get the product to market. We
Post a Comment
Read more
More posts