Showing posts from March, 2019
Show All

March 20, 2019
By: Rod Garland I am writing this during a “booth duty” break in the ESFS (Earth Science for Society) event. The event introduces Earth Sciences to the youth of Calgary. The kids are mostly aged from 4 to 16 years old, and are from school groups, Guides, Scouts and the public. It is inspiring to see their excitement as they participate in “hands-on” activities, experiments and experience the technologies we use daily in our work.  They are Canada’s future and some, no doubt, will be influenced by this experience when the time comes to choose a career path as they embark on life’s journey.  This event is a credit to the many volunteers who give their time and effort so graciously to make it such a success. Thank you, Annette Milbradt, for getting the CAGC involved with this project and also for the many hours you volunteered at SIM (Seismic in Motion) over the past 15 years. How often have you said, or thought, “if only I had taken a different path in life” or, “if
Post a Comment
Read more

Canada has become a country that cannot get anything done but i did (eventually) get my woodshed built! 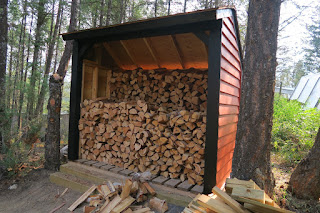 By: Doug Uffen Amidst all the hype and hysteria in the media, the posturing by politicians these days, and then the involvement of the courts about the Kinder Morgan Trans Mountain pipeline project, the timely construction of my woodshed in Windermere, British Columbia languished, suffering months of construction delay.   The proposed pipeline route goes nowhere close to Windermere, yet this is what happened. Initial construction began in October of 2017 but was suspended in November as the winter weather closed in.   While the foundation and moorings were set in place with the floor and walls framed in, the trusses had not been completed yet and nothing had been closed in.   Plans to invite a couple of friends out to Windermere, B.C., from Calgary for a woodshed “BRO-Project” extended weekend in April of this year, that included some golf and probably a few beers, ran afoul of politics, yes thanks to the impasse with the Kinder Morgan pipeline fiasco.   One of my good friend
Post a Comment
Read more

By: Brian Wm. Schulte PG and Henry Lyatsky Prelude The interpretation and opinions expressed here are the authors' ideas on related science that interests us and affects us.   Some members have quite different interpretations of this science and the editorial committee actively welcomes other articles from other perspectives on this and other interesting topics “We all know that human activities are changing the atmosphere in unexpected and in unprecedented ways.” George H.W. Bush “To be absolutely certain about something, one must know everything or nothing about it.”   Henry Kissinger Many feel passionate about climate change, and they may feel that the climate concerns discussed in this paper are either overblown or understated. Some may feel that climate change due to man-made greenhouse gases (GHGs) is not a valid scientific hypothesis at all, while others may think the world is facing an existential and imminent climate catastrophe. We find no scientifi
Post a Comment
Read more
More posts