How did the energy world change in 2014? Now in its 64th year, the BP Statistical Review of World Energy gathers thousands of numbers that reveal what has happened in the energy markets over the past 12 months. Here, BP’s chief economist, Spencer Dale highlights six significant statistics from the review that help to paint the big energy picture

The overriding story from this year’s BP Statistical Review was a change in ‘weather’ conditions in the energy market during 2014. We saw an end to the eerie calm that had settled over the energy markets from around 2011 and more volatile conditions – that tend to characterise these markets – resumed once again.
Here are six of the most remarkable facts from the energy world in 2014. Each of them raises questions for the industry about the future path of energy; the BP Statistical Review and its data don’t provide all the answers, but they do afford us a foundation to start thinking through the issues.

1. The American energy ‘eagle’ soars: US becomes the #1 oil producer 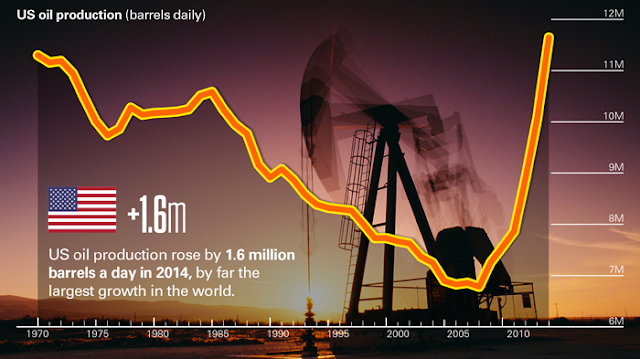 As a result, oil production in 2014 exceeded the previous peak level of US output set in 1970. This is interesting because it challenges the ‘peak oil’ theory, when people say the world will never be able to produce as much as oil as it did in the past. For the US to go beyond its previous 1970 peak is significant.
It also means the US passed both Saudi Arabia and Russia to become the world’s leading oil producer for the first time since 1975. We have truly witnessed a changing of the guard of global energy suppliers.” 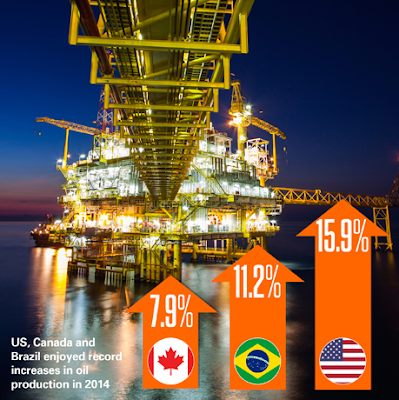 “Driven by the strength of US oil production, countries outside of the Organization of Petroleum Exporting Countries (OPEC) increased their supply by 2.1 million barrels a dayin 2014 – the largest increase we’ve ever seen from non-OPEC output. This growth figure represents more than double its ten-year average.
This increase was at the root cause of the supply imbalance we saw in the oil market - and the adjustment the industry is now living through in terms of lower oil prices.
Among the non-OPEC producers, although the US set the pace, Canada and Brazil also enjoyed record increases in production.” 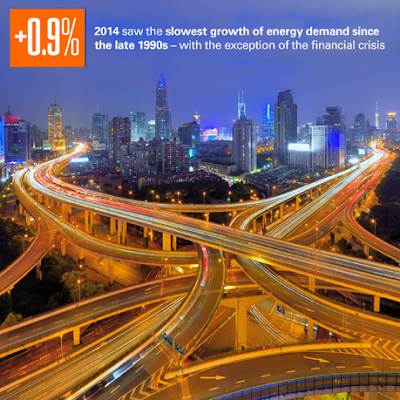 “The big picture for energy in 2014 was one of surprisingly weak growth in energy consumption; with supply growth outstripping demand and a consequent softening in energy prices.

Growth of primary energy consumption slowed to just 0.9% in 2014, which – with the exception of the financial crisis – is the slowest growth of energy demand since the late 1990s. This sharp deceleration in demand occurred despite the global economy expanding at 3.3%, a similar rate to 2013.
Energy consumption grew more slowly than recent averages in all regions, except North America and Africa. Overall, it’s a significant slowdown relative to the previous year, some of which can be explained by weather-related factors in both the US and Europe, but a fundamental driver is what happened in China.”

“China is the world’s largest energy market and is also the single biggest source of global energy demand growth. And in 2014, while the Chinese economy grew by more than 7%, energy consumption grew by only 2.6%. What we’re seeing is that energy market changing very dramatically as the Chinese economy adjusts, with a gradual slowing in its overall growth and a rebalancing away from the energy-intensive industrial sector. 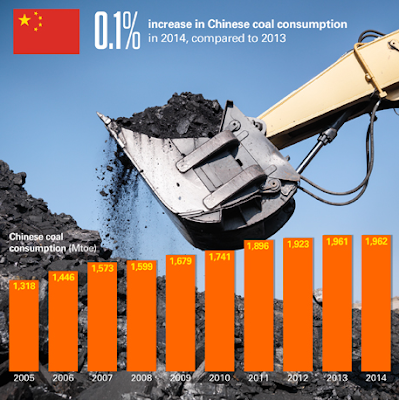 For many years, the fortunes of coal have been inexorably linked to China. That was true as China industrialised rapidly, causing coal to be the fastest-growing fossil fuel over the first part of the 21st century. It was equally true in 2014 as Chinese demand braked sharply and coal consequently became the slowest growing fossil fuel.
This raises an interesting question: is what we’ve seen in China the start of a new trend? Or, is it likely that this slowdown in Chinese energy demand and coal consumption is just a one-off and may be reversed? I think the jury is still out on that.”

5. The carbon factor: emissions at slowest growth since 1990s

“In the context of the climate change debate and on the road towards the United Nations conference in Paris at the end of this year, carbon emissions attract significant attention. And what we saw in 2014 was a sharp slowing in the growth rate of carbon emissions. 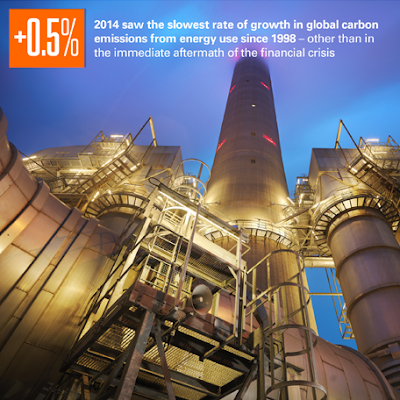 We estimate that global carbon emissions from energy use rose by just 0.5% in 2014, the slowest rate of growth since 1998 (other than in the immediate aftermath of the financial crisis). That compares to an average increase in carbon emissions of about 2% over the last 10 years. The single most important factor driving this slowdown in emissions growth was the developments in China.”

6. Two sides to every story: how renewables fared

“I’d describe the renewables story as one that can be viewed as ‘half-full’ or ‘half-empty’. On one side, there’s the fact that the growth in renewables (including biofuels) accounted for almost a third of the total increase in primary energy in 2014, and provided more than 40% of the increase in power generation. These are big numbers.
On the other side of the coin – a more ‘half-empty’ story – is that renewables energy growth in 2014 remained robust at 12%, but that’s below the 10-year average of 15.4%. This slowdown was driven by wind which grew at less than half of its ten-year rate, reflecting both less public policy support (in EU and US) and low wind speeds (in China). Overall, renewables only provided 3% of primary energy.
So, how to explain this growth at the same time as a seemingly static state for renewables? Essentially, overall growth rate of energy demand slowed, but the renewables sector continued its ‘normal’ growth as it’s not sensitive to the demand side. But, because the overall growth in energy demand slowed so sharply, renewables accounted for a larger share of a smaller pie.” 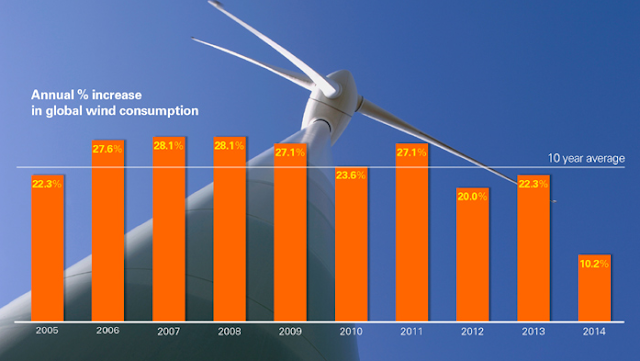